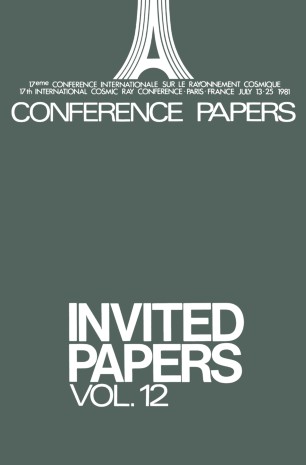 The Proceedings of the 17th International Cosmic Ray Conference held in Paris, July 15 to 25, 1981, appear in two sets. The Regular Volumes, 1 to 8, contain contributed papers received at the Secretariat by April 1st, 1981. They were issued at the opening of the Conference. The Late Volumes, 9 to 14, contain contributed papers received after that date, Invited and Rapporteur Talks, and the General Index. The assiduous reader will notice several changes with respect to the well-established traditions of the Conference. 1/ Following a recommendation of the Commission an Cosmic Rays of IUPAP, and although an increase in the total number of papers submitted was noticed as compared to the 16th ICRC (Kyoto, 1979), the total number of pages has been significantly reduced, thanks to introduction of three new rules for publication. (i) None of the first "Preliminary" Abstracts was published. These abstracts had to be confirmed, either by a new "Confirming Abstract" or by a Full Paper. The Confirming Abstracts are included in the Proceedings. (ii) The sum of the "fractional" contributions of each author should not exceed 3 papers, and each author should not appear in more than 10 papers. (iii) The maximum number of pages per paper was reduced from 6 to 4. The Organizing Committee thanks all authors who have, in their vast majority, very efficiently cooperated by kindly complying with these new rules. The papers we selected an the basis of the Preliminary Abstracts.