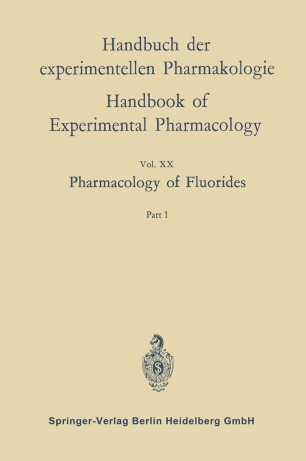 One might well ask why another volume dealing with biological aspects of compounds of fluorine should be offered to the scientific community, already burdened with a literature too massive to be comfortably ingested. Prior toW orld War II this question simply did not arise: there was not sufficient interest or literature in the field to warrant anything beyond the classical monograph pub­ 1 lished by KAJ RoHOLM in 1937 • RoHOLM's work was directed chiefly toward a better understanding of the effects of fluorides on the general health of workers in the cyrolite industry. However, with the demonstration that water-borne fluoride was a causative agent of both mottled enamel and increased resistance to dental caries, the ground­ work was laid in the 1930's and early 1940's for a greatly increased interest in the biological effects of fluorides in human beings. During this time and earlier for that matter, work also had been going steadily ahead in the less spectacular area of effects produced in poultry and livestock when fluorine-containing rock phosphate was incorporated in the ration, and when pasture land was contami­ nated with fluorides released during the large-scale conversion of rock phosphate to fertilizer and phosphoric acid. These latter aspects of the problem had led to the development of a respectable literature in plant physiology, dealing with the effects of fluoride on vegetation.