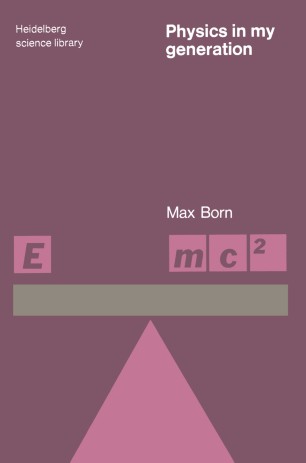 Physics in My Generation

THE idea of collecting these essays occurred to me when, in the leisure of retire­ ment, I scanned some of my own books and found that two of the more widely read show a startling change of attitude to some of the fundamental concepts of science. These are Einstein's Theory of Relativity of 1921 and the American edition of The Restless Universe of 1951. I have taken the introduction of as the former the first item of this collection, the postscript to the latter as its last. These books agree in the relativistic concept of space and time, but differ in many other funda­ mental notions. In 1921 I believed-and I shared this belief with most of my contemporary physicists-that science produced an objective knowledge of the world, which is governed by deterministic laws. The scientific method seemed to me superior to other, more subjective ways of forming a picture of the world­ philosophy, poetry, and religion; and I even thought the unambiguous language of science to be a step towards a better understanding between human beings. In 1951 I believed in none of these things. The border between object and subject had been blurred, deterministic laws had been replaced by statistical ones, and although physicists understood one another well enough across all national frontiers they had contributed nothing to a better understanding of nations, but had helped in inventing and applying the most horrible weapons of destruction.