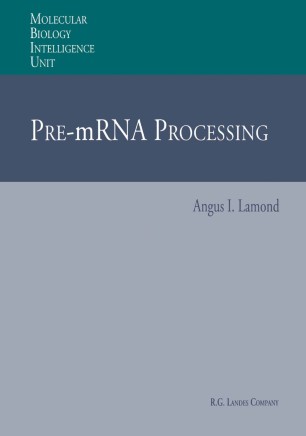 he past fifteen years have seen tremendous growth in our understanding of T the many post-transcriptional processing steps involved in producing func­ tional eukaryotic mRNA from primary gene transcripts (pre-mRNA). New processing reactions, such as splicing and RNA editing, have been discovered and detailed biochemical and genetic studies continue to yield important new insights into the reaction mechanisms and molecular interactions involved. It is now apparent that regulation of RNA processing plays a significant role in the control of gene expression and development. An increased understanding of RNA processing mechanisms has also proved to be of considerable clinical importance in the pathology of inherited disease and viral infection. This volume seeks to review the rapid progress being made in the study of how mRNA precursors are processed into mRNA and to convey the broad scope of the RNA field and its relevance to other areas of cell biology and medicine. Since one of the major themes of RNA processing is the recognition of specific RNA sequences and structures by protein factors, we begin with reviews of RNA-protein interactions. In chapter 1 David Lilley presents an overview of RNA structure and illustrates how the structural features of RNA molecules are exploited for specific recognition by protein, while in chapter 2 Maurice Swanson discusses the structure and function of the large family of hnRNP proteins that bind to pre-mRNA. The next four chapters focus on pre-mRNA splicing.