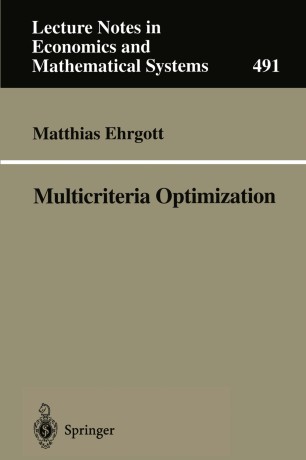 Life is about decisions. Decisions, no matter if made by a group or an indi­ vidual, involve several conflicting objectives. The observation that real world problems have to be solved optimally according to criteria, which prohibit an "ideal" solution - optimal for each decision-maker under each of the criteria considered - has led to the development of multicriteria optimization. From its first roots, which where laid by Pareto at the end of the 19th century the discipline has prospered and grown, especially during the last three decades. Today, many decision support systems incorporate methods to deal with conflicting objectives. The foundation for such systems is a mathematical theory of optimization under multiple objectives. Fully aware of the fact that there have been excellent textbooks on the topic before, I do not claim that this is better text, but it has a has a consid­ erably different focus. Some of the available books develop the mathematical background in great depth, such as [SNT85, GN90, Jah86). Others focus on a specific structure of the problems covered as [Zel74, Ste85, Mie99) or on methodology [Yu85, CH83a, HM79). Finally there is the area of multicriteria decision aiding [Roy96, Vin92, KR93), the main goal of which is to help deci­ sion makers find the final solution (among many "optimal" ones) eventually to be implemented.