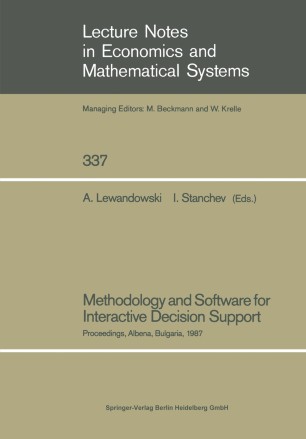 Proceedings of the International Workshop Held in Albena, Bulgaria, October 19–23, 1987

These Proceedings report the scientific results of an International Workshop on Methodology and Software for Interactive Decision Support organized jointly by the System and Decision Sciences Program of the International Institute for Applied Sys­ tems Analysis (nASA, located in Laxenburg, Austria) and The National Committee for Applied Systems Analysis and Management in Bulgaria. Several other Bulgarian institutions sponsored the Workshop - The Committee for Science to the Council of Ministers, The State Committee for Research and Technology and The Bulgarian In­ dustrial Association. The workshop was held in Albena, on the Black Sea coast. More than 80 scientists from 15 countries attended the workshop; 50 lectures were presented and 17 computer demonstration sessions took place. This Workshop is one of a series of meetings organized by nASA with the collaboration of scientific institutions from the National Member Organization countries. The previous meetings took place in Austria (1983), Hungary (1984) and the German Democratic Republic (1985). All proceedings of these meetings have been published by Springer Verlag in the series Lecture Notes in Economics and Mathematical Systems.