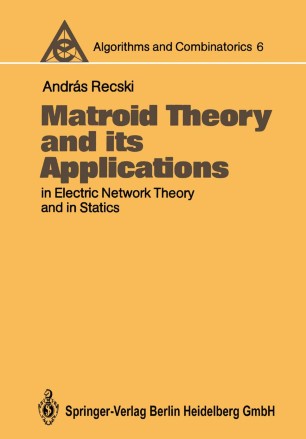 Part of the Algorithms and Combinatorics book series (AC, volume 6)

I. The topics of this book The concept of a matroid has been known for more than five decades. Whitney (1935) introduced it as a common generalization of graphs and matrices. In the last two decades, it has become clear how important the concept is, for the following reasons: (1) Combinatorics (or discrete mathematics) was considered by many to be a collection of interesting, sometimes deep, but mostly unrelated ideas. However, like other branches of mathematics, combinatorics also encompasses some gen­ eral tools that can be learned and then applied, to various problems. Matroid theory is one of these tools. (2) Within combinatorics, the relative importance of algorithms has in­ creased with the spread of computers. Classical analysis did not even consider problems where "only" a finite number of cases were to be studied. Now such problems are not only considered, but their complexity is often analyzed in con­ siderable detail. Some questions of this type (for example, the determination of when the so called "greedy" algorithm is optimal) cannot even be answered without matroidal tools.