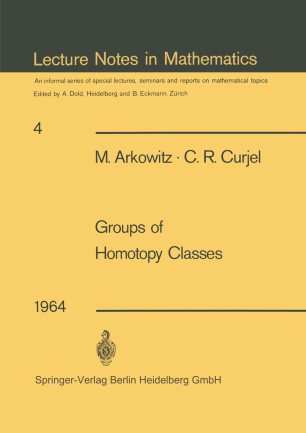 Many of the sets that one encounters in homotopy classification problems have a natural group structure. Among these are the groups [A,nX] of homotopy classes of maps of a space A into a loop-space nx. Other examples are furnished by the groups ~(y) of homotopy classes of homotopy equivalences of a space Y with itself. The groups [A,nX] and ~(Y) are not necessarily abelian. It is our purpose to study these groups using a numerical invariant which can be defined for any group. This invariant, called the rank of a group, is a generalisation of the rank of a finitely generated abelian group. It tells whether or not the groups considered are finite and serves to distinguish two infinite groups. We express the rank of subgroups of [A,nX] and of C(Y) in terms of rational homology and homotopy invariants. The formulas which we obtain enable us to compute the rank in a large number of concrete cases. As the main application we establish several results on commutativity and homotopy-commutativity of H-spaces. Chapter 2 is purely algebraic. We recall the definition of the rank of a group and establish some of its properties. These facts, which may be found in the literature, are needed in later sections. Chapter 3 deals with the groups [A,nx] and the homomorphisms f*: [B,n~l ~ [A,nx] induced by maps f: A ~ B. We prove a general theorem on the rank of the intersection of coincidence subgroups (Theorem 3. 3).