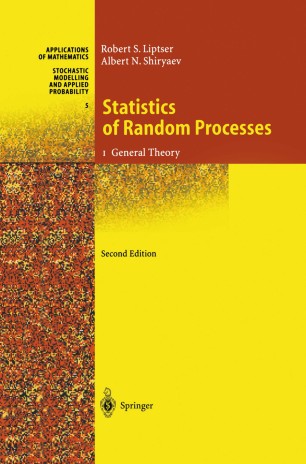 Part of the Applications of Mathematics book series (SMAP, volume 5)

The subject of these two volumes is non-linear filtering (prediction and smoothing) theory and its application to the problem of optimal estimation, control with incomplete data, information theory, and sequential testing of hypothesis. The required mathematical background is presented in the first volume: the theory of martingales, stochastic differential equations, the absolute continuity of probability measures for diffusion and Ito processes, elements of stochastic calculus for counting processes. The book is not only addressed to mathematicians but should also serve the interests of other scientists who apply probabilistic and statistical methods in their work. The theory of martingales presented in the book has an independent interest in connection with problems from financial mathematics.
In the second edition, the authors have made numerous corrections, updating every chapter, adding two new subsections devoted to the Kalman filter under wrong initial conditions, as well as a new chapter devoted to asymptotically optimal filtering under diffusion approximation. Moreover, in each chapter a comment is added about the progress of recent years.