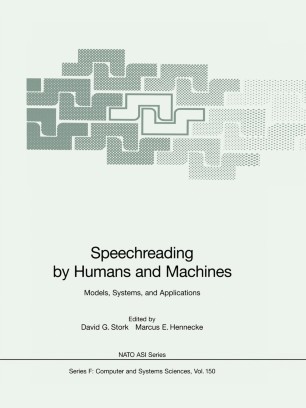 Speechreading by Humans and Machines

This book is one outcome of the NATO Advanced Studies Institute (ASI) Workshop, "Speechreading by Man and Machine," held at the Chateau de Bonas, Castera-Verduzan (near Auch, France) from August 28 to Septem­ ber 8, 1995 - the first interdisciplinary meeting devoted the subject of speechreading ("lipreading"). The forty-five attendees from twelve countries covered the gamut of speechreading research, from brain scans of humans processing bi-modal stimuli, to psychophysical experiments and illusions, to statistics of comprehension by the normal and deaf communities, to models of human perception, to computer vision and learning algorithms and hardware for automated speechreading machines. The first week focussed on speechreading by humans, the second week by machines, a general organization that is preserved in this volume. After the in­ evitable difficulties in clarifying language and terminology across disciplines as diverse as human neurophysiology, audiology, psychology, electrical en­ gineering, mathematics, and computer science, the participants engaged in lively discussion and debate. We think it is fair to say that there was an atmosphere of excitement and optimism for a field that is both fascinating and potentially lucrative. Of the many general results that can be taken from the workshop, two of the key ones are these: • The ways in which humans employ visual image for speech recogni­ tion are manifold and complex, and depend upon the talker-perceiver pair, severity and age of onset of any hearing loss, whether the topic of conversation is known or unknown, the level of noise, and so forth.