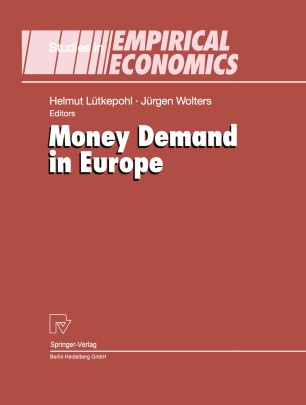 In 1999 a number of member states of the European Union will adopt a common currency. This change in the monetary system requires that a Eur­ opean Central Bank is set up and a common monetary policy is pursued. There is general agreement among those countries which are likely to join the common currency that price level stability has to be the ultimate objec­ tive of monetary po1icy. It is an open issue, however, what kind of policy is best suited for that purpose. The alternative strategies under discussion are a direct inflation targeting, an intermediate monetary targeting or a mixture of both. For these policy strategies a stable money demand relation is of cen­ tral importance. Therefore a workshop on Money Demand in Europe was organized at the Humboldt University in Berlin on October 10/11, 1997. This research conference brought together academic and central bank econo­ mists and econometricians predominantly from Europe to discuss issues on specification, estimation and, in particular, stability of money demand rela­ tions both in a single equation and in a systems framework. In this volume revised versions of the papers presented and discussed at the workshop are collected. The volume thereby gives an overview of money demand analysis in Europe on the eve of the introduction of the Euro in some European countries. It contributes to the discussion on a suitable monetary policy for the new European Central Bank.