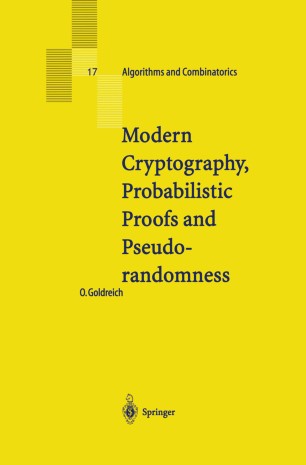 Part of the Algorithms and Combinatorics book series (AC, volume 17)

You can start by putting the DO NOT DISTURB sign. Cay, in Desert Hearts (1985). The interplay between randomness and computation is one of the most fas­ cinating scientific phenomena uncovered in the last couple of decades. This interplay is at the heart of modern cryptography and plays a fundamental role in complexity theory at large. Specifically, the interplay of randomness and computation is pivotal to several intriguing notions of probabilistic proof systems and is the focal of the computational approach to randomness. This book provides an introduction to these three, somewhat interwoven domains (i.e., cryptography, proofs and randomness). Modern Cryptography. Whereas classical cryptography was confined to the art of designing and breaking encryption schemes (or "secrecy codes"), Modern Cryptography is concerned with the rigorous analysis of any system which should withstand malicious attempts to abuse it. We emphasize two aspects of the transition from classical to modern cryptography: ( 1) the wide­ ning of scope from one specific task to an utmost wide general class of tasks; and (2) the move from an engineering-art which strives on ad-hoc tricks to a scientific discipline based on rigorous approaches and techniques.