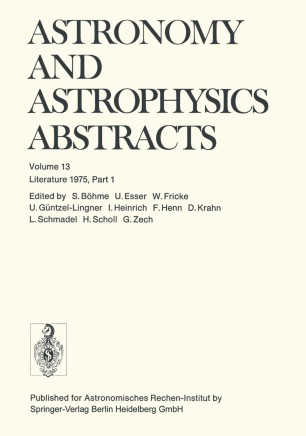 Astronomy and Astrophysics Abstracts, which has appeared in semi-annual volumes since 1969, is de­ voted to the recording, summarizing and indexing of astronomical publications throughout the world. It is prepared under the auspices of the International Astronomical Union (according to a resolution adopted at the 14th General Assembly in 1970). Astronomy and Astrophysics Abstracts aims to present a comprehensive documentation of literature in all fields of astronomy and astrophysics. Every effort will be made to ensure that the average time interval between the date of receipt of the original literature and publication of the abstracts will not exceed eight months. This time interval is near to that achieved by monthly abstracting journals, com­ pared to which our system of accumulating abstracts for about six months offers the advantage of greater convenience for the user. Volume 13 contains literature published in 1975 and received before August 15, 1975; some older literature which was received late and which is not recorded in earlier volumes is also included. We acknowledge with thanks contributions to this volume by Dr. J. Bouska, who surveyed journals and publications in the Czech language and supplied us with abstracts in English, and by the Common­ wealth Scientific and Industrial Research Organization (C.S.I.R.O.), Sydney, for providing titles and abstracts of papers on radio astronomy. We want to acknowledge valuable contributions to this vol­ ume by Zentralstelle ftir Atomkemenergie-Dokumentation, Leopoldshafen, which supported our ab­ stracting service by sending us retrospective literature searches.