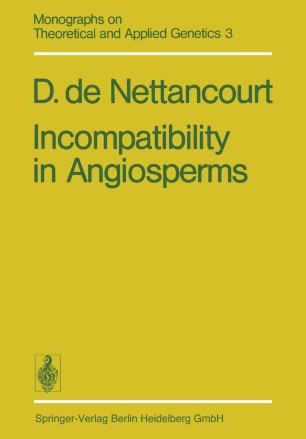 Part of the Monographs on Theoretical and Applied Genetics book series (GENETICS, volume 3)

Attempting to collect, sort out, comment on and summarize from available literature the relevant information dealing with a specific problem is always a difficult task which necessarily involves sub­ jective choices and implies a considerable risk of errors and omis­ sions. The difficulty is increased when, as in the case of incompati­ bility in angiosperms, the subject to be treated traces its history to preDarwinian times and reflects the total sum of numerous in­ vestigations dealing with widely different disciplines, such as ge­ netics, cytology, biochemistry, systematics and physiology, which no single reviewer may pretend to master sufficiently to avoid completely the possibility of misinterpretation. Furthermore, the complexity of the task is further augmented by the fact that the student of incompatibility, confronted as he or she is with still poorly understood phenomena of genetic control and molecular recognition, often tends to be speculative and, in some instances, over-imaginative at the time of fitting research observations and experimental data into appropriate models, schemes and hypo­ theses. The compensation for such a state of affair is, however, a strong one and lies in the remarkable willingness and readiness of "in­ compatibilists" to cooperate, and to provide information, ex­ planations and illustrations to anyone attempting to penetrate into their universe of research and of reflection.