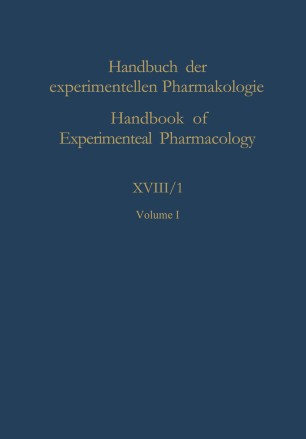 Part 1: Histamine. Its Chemistry, Metabolism and Physiological and Pharmacological Actions

It was an agreable, though strenuous task to edit a book with so many distin­ guished contributors, on a subject to which I have given half of my life. In 1959, when Prof. O. EICHLER invited me to edit a book on "Histamine and Anti­ histaminics", as a supplement to HEFFTER'S Handbuch, I thought the task could be done in three years. Now, five years are gone and only half is fulfilled. Though, so far as the "Histamine" part of the book is concerned, the initial plan has been followed very closely, we had to leave the Anti-histaminics for another volume of unpredictable dimensions. In 1924, eight pages inserted in a Chapter on M utterkorn, by ARTHUR R. CUSHING were considered enough, in vol. II, Part II, pg. 1319-1326, of the Handbuch. Now, 922 pages did not suffice to cover all the aspects of the subject. Especially in the last few years the subject has expanded in so many directions, that the antihistaminic part had to be excluded from the present volume. Possibly, another thousand pages will be necessary to cover what remains of the subject. In planning the book we made great use of the excellent and classical mono­ graph by W. FELDBERG and E. SCHILF on Histamin, published by Julius Springer, in 1930.