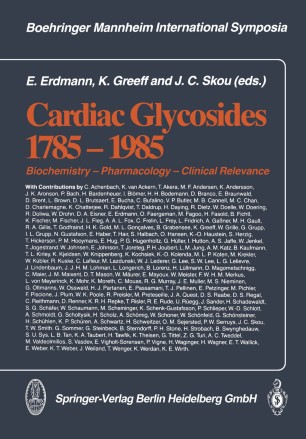 The bicentenary of William Withering's now famous medical report entitled "An Account of the Foxglove and Some of its Medical Uses" has given us the occasion to analyze the state of the art. Cardiac glycosides in 1985 are considered tobe the basis for medical treatment of myocardial failure, together with diuretics and vasodilators in the more severe cases. Nevertheless, the controversy as to their exact place in the treatment of heart failure with sinus rhythm has never ceased. Although cardiac glycosides are of unquestionable value in tachycardia caused by atrial fibrillation or atrial flutter, the chronic use of these drugs in sinus rhythm is not generally accepted. The development of tolerance has been reported. It is of interest that Withering hirnself wrote: "-let it (foxglove) be continued until it either acts on the kidneys, the stomach, the pulse, or the bowels; Iet it be stopped upon the first appearance of any of these effects, and I will maintain that the patient will not suffer from its exhibition, nor the practitioner be disappointed in any reasonable expectation. " In West Germany alone, more than three million patients (about 5% of the total population) are constantly taking cardiac glycosides. These drugs are the most prescribed medicaments in many countries. Thus, we considered it worthwhile and necessary to review in a critical way today's knowledge about the foxglove; to report new findings and to evaluate old Statements.