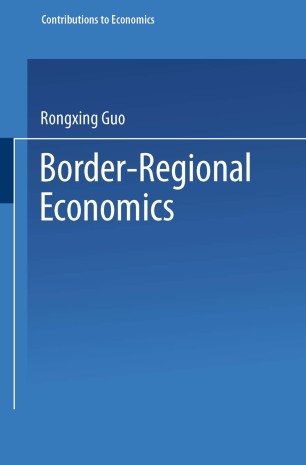 This research work is to commemorate all Guos' ancestor, who guarded the border for his Majesty dutifully, and who is the foremost supporter in my academic career. For the past decades, economists and geographers from both developed and developing countries have studied the economic issues either within individual countries (regions), or between countries (regions). Only a relatively small part of these efforts has been focused on the economic affairs of those countries' (regions') peripheral areas and even less attention has been given to the structural analysis of economic mechanisms of the border-regions with different political levels and compositions. My interest in border-regions more or less directly relates to some personal reasons of mine. The Chinese family name, Guo, means a guard for an outer city-wall (herein it used to be a political and military border in ancient China, e. g. , the Chinese Great Wall). It is more interesting that Guo is written with a different Chinese character from that used for the like­ sounding "Guo" (country). The Chinese writing of the latter is a square frame inside which lies a Chinese character, Wang (king), in the centre and a point in the comer. It might be simply supposed that the "point" was used by the inventor to necessarily represent the "border guard" probably because of its vital importance to the country.