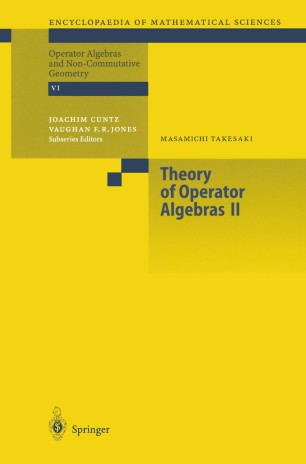 to the Encyclopaedia Subseries on Operator Algebras and Non-Commutative Geometry The theory of von Neumann algebras was initiated in a series of papers by Murray and von Neumann in the 1930's and 1940's. A von Neumann algebra is a self-adjoint unital subalgebra M of the algebra of bounded operators of a Hilbert space which is closed in the weak operator topology. According to von Neumann's bicommutant theorem, M is closed in the weak operator topology if and only if it is equal to the commutant of its commutant. A factor is a von Neumann algebra with trivial centre and the work of Murray and von Neumann contained a reduction of all von Neumann algebras to factors and a classification of factors into types I, IT and III. C* -algebras are self-adjoint operator algebras on Hilbert space which are closed in the norm topology. Their study was begun in the work of Gelfand and Naimark who showed that such algebras can be characterized abstractly as involutive Banach algebras, satisfying an algebraic relation connecting the norm and the involution. They also obtained the fundamental result that a commutative unital C* -algebra is isomorphic to the algebra of complex valued continuous functions on a compact space - its spectrum. Since then the subject of operator algebras has evolved into a huge mathematical endeavour interacting with almost every branch of mathematics and several areas of theoretical physics.