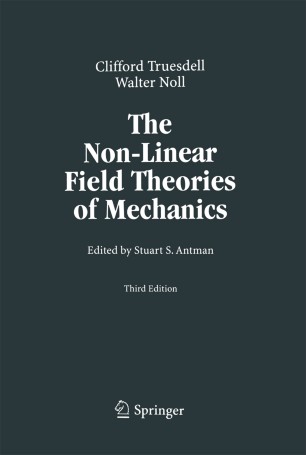 The Non-Linear Field Theories of Mechanics

Non-Linear Field Theories of Mechanics has become a classic treatise in the field of continuum mechanics. Originally published nearly forty years ago, it probably has influenced practically all subsequent monographs on the subject. Its main parts are:

- The General Theory of Material Behavior

This third edition includes the corrections made by the late C. Truesdell in his personal copy. It is annotated by W. Noll and by S. Antman who describe the monograph’s genesis and the impact it has made on the modern development of mechanics. Originally published as Volume III/3 of the famous Encyclopedia of Physics in 1965, this book describes and summarizes "everything that was both known and worth knowing in the field at the time." It also greatly contributed to the unification and standardization of the concepts, terms and notations in the field.