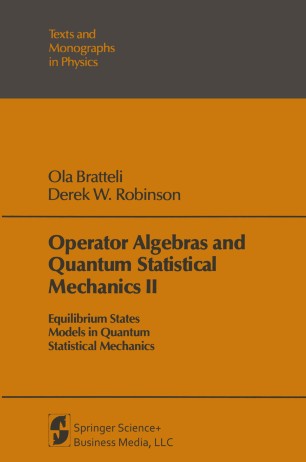 In this chapter, and the following one, we examine various applications of C*-algebras and their states to statistical mechanics. Principally we analyze the structural properties of the equilibrium states of quantum systems con­ sisting of a large number of particles. In Chapter 1 we argued that this leads to the study of states of infinite-particle systems as an initial approximation. There are two approaches to this study which are to a large extent comple­ mentary. The first approach begins with the specific description of finite systems and their equilibrium states provided by quantum statistical mechanics. One then rephrases this description in an algebraic language which identifies the equilibrium states as states over a quasi-local C*-algebra generated by sub­ algebras corresponding to the observables of spatial subsystems. Finally, one attempts to calculate an approximation of these states by taking their limit as the volume of the system tends to infinity, the so-called thermodynamic limit. The infinite-volume equilibrium states obtained in this manner provide the data for the calculation of bulk properties of the matter under considera­ tion as functions of the thermodynamic variables. By this we mean properties such as the particle density, or specific heat, as functions of the temperature and chemical potential, etc. In fact, the infinite-volume data provides a much more detailed, even microscopic, description of the equilibrium phenomena although one is only generally interested in the bulk properties and their fluctuations.