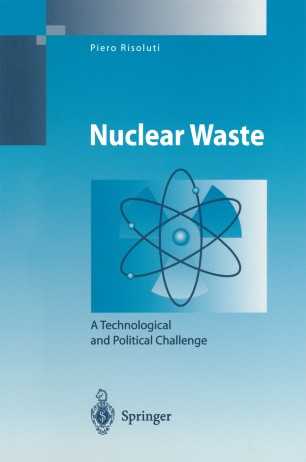 A Technological and Political Challenge

Disposal of the wastes produced by the peaceful applications of nuclear energy is commonly perceived as one of the most complex environmental problems of our time. Evidence of this concern is seen in the difficulties encountered in selecting suitable sites for final repositories for this waste – difficulties that critically affect the whole issue of the social acceptance of nuclear energy.

Nevertheless, science and technology are able today to provide safe and reliable solutions for the disposal of nuclear waste, much more so than for any other hazardous by-product of industrial activities.

This discrepancy between public perception and actual technological achievements is largely the result of a disinformation campaign perpetuated for almost a quarter of century by antinuclear activists. This has been compounded by the lack of an effective response from scientists and engineers involved in waste management, many of whom, especially after Chernobyl, did not feel comfortable speaking out in public in defence of the technology that they had developed.

This book tries to explain the origin of the negative public perception of nuclear energy and introduces the most significant worldwide technical achievements in nuclear waste disposal.