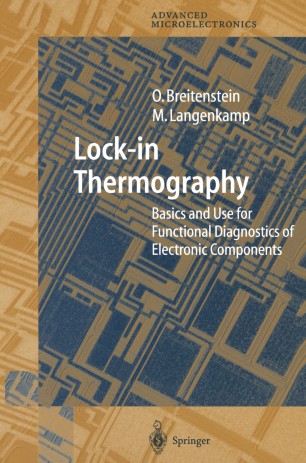 Basics and Use for Functional Diagnostics of Electronic Components

The book deals with lock-in thermography as a special variant of the well known IR thermography for all applications where the heat of the sample can be pulsed. Compared to steady-state thermography, the lock-in mode enables a much improved signal/noise ratio (up to 1000x) by signal averaging, a far better lateral resolution, and it may provide inherent emissivity correction. Thus, it replaces thermal failure analysis previously carried out by using conventional IR microscopy, liquid crystal imaging, or fluorescent microthermal imaging. Various experimental approaches to lock-in thermography are reviewed with special emphasis on the systems developed by the authors themselves. Thus, the book provides a useful introduction to this technique and a helpful guide for scientists and engineers working in electronic device failure analysis. It concludes with a detailed theoretical treatment of the propagation of thermal waves, which is presented as a basis for various applications, e.g., integrated circuits, MOS structures, solar cells and solar modules.