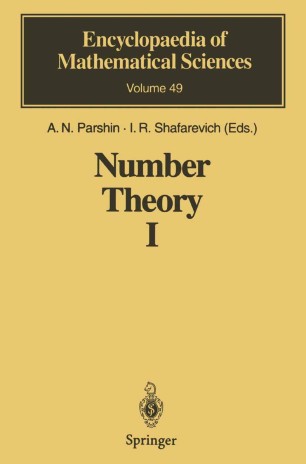 This book surveys from a unified point of view both the modern state and the trends of continuing development of various branches of number theory. Motivated by elementary problems (including some modern areas such as cryptography, factorization and primality testing), the central ideas of modern theories are exposed: algebraic number theory, calculations and properties of Galois groups, non-Abelian generalizations of class field theory, recursive computability and links with Diophantine equations, the arithmetic of algebraic varieties, connections with modular forms, zeta- and L-functions. The authors have tried to present the most significant results and methods of modern time. An overview of the major conjectures is also given in order to illustrate current thinking in number theory. Most of these conjectures are based on analogies between functions and numbers, and on connections with other branches of mathematics such as algebraic topology, analysis, representation theory and geometry