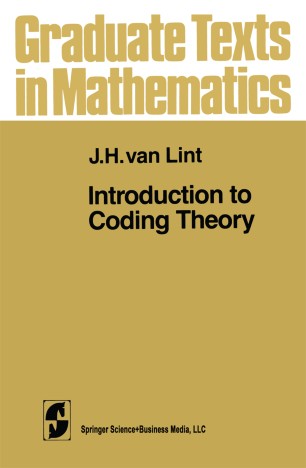 Coding theory is still a young subject. One can safely say that it was born in 1948. It is not surprising that it has not yet become a fixed topic in the curriculum of most universities. On the other hand, it is obvious that discrete mathematics is rapidly growing in importance. The growing need for mathe­ maticians and computer scientists in industry will lead to an increase in courses offered in the area of discrete mathematics. One of the most suitable and fascinating is, indeed, coding theory. So, it is not surprising that one more book on this subject now appears. However, a little more justification of the book are necessary. A few years ago it was and a little more history remarked at a meeting on coding theory that there was no book available an introductory course on coding theory (mainly which could be used for for mathematicians but also for students in engineering or computer science). The best known textbooks were either too old, too big, too technical, too much for specialists, etc. The final remark was that my Springer Lecture Notes (# 201) were slightly obsolete and out of print. Without realizing what I was getting into I announced that the statement was not true and proved this by showing several participants the book Inleiding in de Coderingstheorie, a little book based on the syllabus of a course given at the Mathematical Centre in Amsterdam in 1975 (M. C. Syllabus 31).