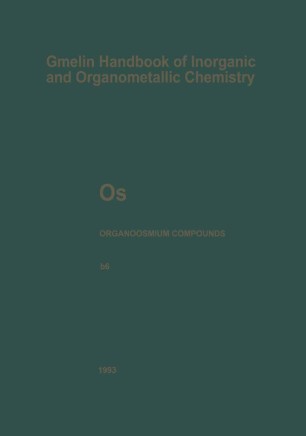 Part of the Gmelin Handbook of Inorganic and Organometallic Chemistry - 8th Edition book series (GMELIN, volume O-s / a- / B / 6)

The present volume, "Organoosmium Compounds" 8 6, systematically covers the litera­ ture through 1992, including many later references. This volume is the first published of Series 8. This series is devoted to compounds containing two or more osmium atoms. The volume forms a unit with" Organoosmium Compounds" 8 5 (in preparation). 80th volumes deal with trinuclear compounds with ligands other than CO which are bonded to Os by one carbon atom ("1L ligands "), regardless of whether the ligand is additionally coordinated to Os by heteroatoms. Generally CO groups are additional ligands. As is usual in the organometallic Gmelin series, the term "trinuclear" means three osmium atoms in the molecule without regard to any additional metals that may be present. The content and the subdivision of both volumes are described on p. 1. Volume 85 will deal with homometallic compounds in which the bonding C atom of the leading 1L ligand is bonded to Os by one non-bridging Os-C bond. The first part of the present volume, 86, is devoted to homometallic compounds in which the bonding C atom of the 1L ligand bridges two or three Os atoms. A second part deals with all heterometallic compounds with 1L ligands other than CO. An Empirical Formula Index and a Ligand Formula Index for both volumes 8 5 and 86 will be included in volume 8 5. For abbreviations and dimensions used throughout this volume, see p. X.