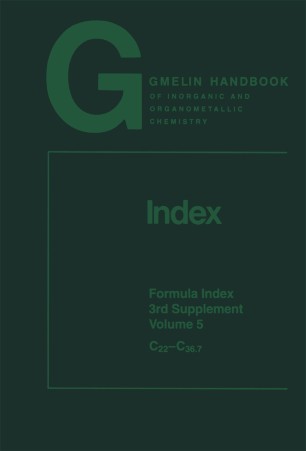 The Gmelin Formula Index and the First and Second Supplement covered the volumes of the Eighth Edition of the Gmelin Handbook which appeared up to the end of 1987. This Third Supplement extends the Gmelin Formula Index and includes the compounds from the volumes until 1992. The publication of the Third Supplement enables to locate all compounds described in the Gmelin Handbook of Inorganic and Organometallic Chemistry since 1924. The basic structure of the Formula Index remains the same as the previous editions. Computer methods were employed during the preparation and the publication of the Third Supplement. Data acquisition, sorting, and data handling were performed using a suite of computer programs, developed originally by B. Roth, now at Chemplex GmbH. The SGML application for the final data processing for printing was developed in the com­ puter department of the Gmelin Institute and at Universitätsdruckerei H. Stürtz AG, Würzburg. Frankfurt am Main, March 1994 U. Nohl, G. Olbrich Instructions for Users of the Formula Index First CoLumn (EmpiricaL FormuLa) The empirical formulae are arranged in alphabetical order of the element symbols and by increasing values of the subscripts. Any indefinite subscripts are placed at the end of the respective sorting section. Ions always appear after the neutral species, positive ions preceding negative ones.