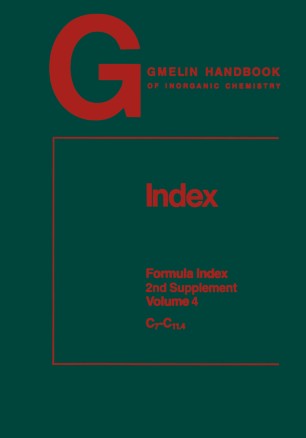 The GmeLin Formula Index and its First Supplement covered those volumes of the Eighth Edition of the Gmelin Handbook which had been issued up to the end of 1979. The present Second Supplement updates the Index by inclusion of the volumes which appeared up to the end of 1987. With this Second Supplement all compounds described in the Gmelin Handbook of Inorganic Chemistry in the period between 1924 and 1987 can be located. The basic structure of the Formula Index remains the same as in the previous editions. Computer techniques were employed in the preparation and print of the Second Supple­ ment. The data acquisition, sorting, and further data handling were performed with the aid of a series of computer programs developed by staff members of the former "Online Group" of the Gmelin Institute, now at Chemplex GmbH, and by the printer" UniversitiHs­ druckerei H. StUrtz AG, WOrzburg". Whereas the Handbook itself will continue to appear in printed form, the present Second Supplement of the Index is intended to be the last one issued in print. The cumulated contents of the Index and its Supplements are contained in the Gmelin Formula Index (GFI) database which is available to the scientific community via STN. This database will be updated annually to include the published Handbook volumes.