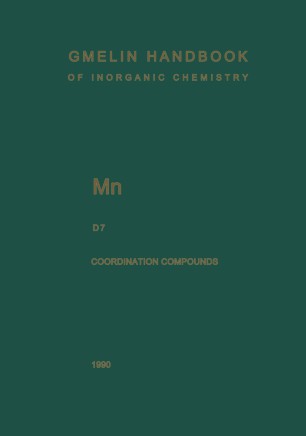 Of system-number "Manganese", Part B, which de- scribes the Element Manganese, has been completed. Also completed is Part C, describing the compounds, with 10 volumes. Part A will present the history and occurence of manganese. Volume A 1 on the history has already been published, the other volumes dealing with occurence of manganese are in preparation. Part D is devoted to the coordination compounds. Part D 1, D 2, D 3, D 4, D 5 and D 6 thereof are already available. The present volume "Manganese D 7" continues the description of the coordination compounds. Complexes with nitriles, with nitro-hydrocarbons, and with ligands containing sulfur, selenium or tellurium are described. Many of the coordination compounds containing sulfur are of analytical or biological interest. A formula index lists the ligands and the empirical formulas.