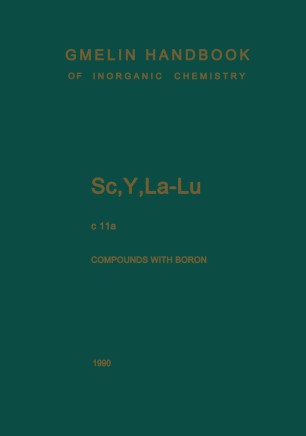 The volume "Rare Earth Elements" C 11 deals with the compounds and systems of the rare earth elements with boron, Le., borides, borates, and associated alkali double compounds. As in all earlier volumes of "Rare Earth Elements" Se ries C ("Seltenerdelemente" Reihe Cl, comparative data are presented in sections preceding treatment of the individual compounds and systems. Topics of the present volume C 11 aare the comparative data on the borides and the indi­ vidual sections on the systems and borides containing Sc, Y, and La. The individual sections for the systems and borides with Ce to Lu can be found in the following volume C 11 b together with the borates, their alkali double compounds, and other compounds containing Ce to Lu, boron and elements related by the Gmelin system. The most extensively studied borides treated in the comparative sections are of the type MB. These rare earth hexaborides are refractory compounds and so me of them, especially e LaBe, are good thermionic emissive materials or exhibit other interesting physical properties.