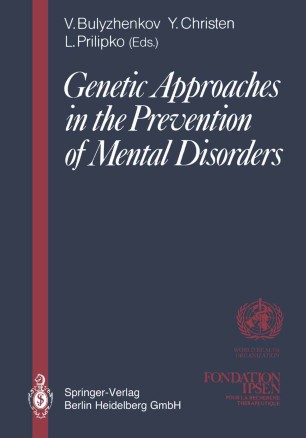 Genetic Approaches in the Prevention of Mental Disorders

Proceedings of the joint-meeting organized by the World Health Organization and the Fondation Ipsen in Paris, May 29–30, 1989

At least 40 million people in the worId suffer from the most severe forms of mental disorder such as schizophrenia and some 300 million more are affected by less severe but still incapacitating forms of these conditions, including, for example, drug and alcohol dependence and the consequences of brain trauma. The enor­ mous magnitude of human suffering and the economic losses usually linked of these disorders make them a problem of major public health importance. Recent years have brought with them scientific discoveries which have made it possible to successfully treat most mental disorders and to prevent many others. Some of them, however, cannot be prevented on the basis of today's knowledge, and their treatment remains palliative: further progress in their management awaits an improvement in our understanding of mechanisms by which they come into existence and of factors which influence their course. Recent years have also seen a significant increase in knowledge about genetic factors influencing the occurrence and course of a variety of diseases, for example, cystic fibrosis, Duchenne type muscular dystrophy, thalassemia, and hyperten­ sion. Some of this knowledge and some of the methods that have been developed to obtain it could have direct relevance to the search for a c1earer comprehension of the pathogenesis of mental disorder.