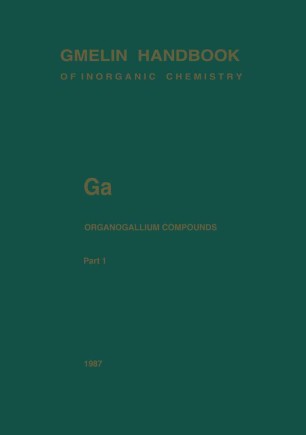 The present volume describes all organogallium compounds, i.e., compounds containing at least one gallium-carbon bond. It covers the literature completely.to the end of 1984 and includes many references to the literature up to the end of 1985. The organic chemistry of gallium is largely dominated by compounds of the types GaR3 (Chapter 1), GaR X _ (Chapters 2 to 12), and M[GaRnX4_nl (M = cation, Chapter 13), where X n 3 n stands for a non-carbon atom or any organic or organometallic group bonded to gallium through a non-carbon atom. The arrangement of GaR X - and M[GaRnX"_nlcompounds by n 3 n the kind of Ga-X bond is evident from the table of contents on pp. XI to XIV. The extensive use of pyrazolyl-containing organogallium anions as polydentate donor ligands in transition metal compounds resulted in a particularly voluminous chapter on anions with Ga-N bonds (13.6). The volume is concluded by a few low-valence organogallium compounds (Chapter 14) that (I) atom and an aromatic ligand in an TJe fashion. exhibit bonding interaction between a gallium Due to a free coordination site at the Ga atom, neutral compounds form many adducts with Lewis bases (symbol D). These adducts are described along with the parent substances either in a subsection of the respective chapter or in a common table at the end of the table.