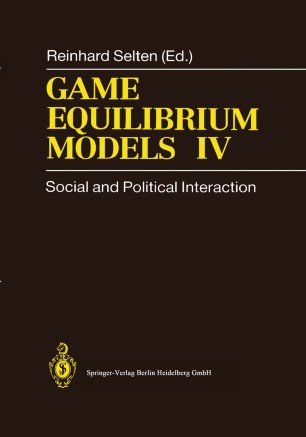 The four volumes of Game Equilibrium Models present applications of non-cooperative game theory. Problems of strategic interaction arising in biology, economics, political science and the social sciences in general are treated in 42 papers on a wide variety of subjects. Internationally known authors with backgrounds in various disciplines have contributed original research. The reader finds innovative modelling combined with advanced methods of analysis. The four volumes are the outcome of a research year at the Center for Interdisciplinary Studies of the University of Bielefeld. The close interaction of an international interdisciplinary group of researchers has produced an unusual collection of remarkable results of great interest for everybody who wants to be informed on the scope, potential, and future direction of work in applied game theory. Volume IV Social and Political Interaction contains game equilibrium models focussing on social and political interaction within communities or states or between states, i.e. national and international social and political interaction. Specific aspects of those interactions are modelled as non-cooperative games and their equilibria are analysed.