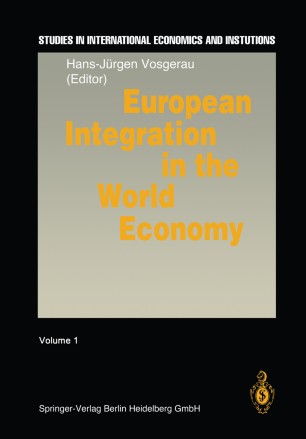 European Integration in the World Economy

Part of the Studies in International Economics and Institutions book series (INTERN.ECONOM.)

Hans-Jtlrgen Vosgerau The world economy has been subjected to extreme changes during the last three years. These changes affect not only trade flows, financial transfers and movements of people, but also the institutional framework. The ongoing process of European integration has to be viewed in this global context, and that is what the present volume tries to do for six important problem areas, viz. the field of Money, Currency and International Stabilization; Federal Tax Systems and the European Community; the area of International Factor Mobility; the International Debt Problem; the Econometrics of Internation~ Trade; and aspects of International Political Economy. In each chapter an effort is made to direct attention to the connections between international economic transactions of various kinds and the political and legal institutions which constitute the organizational framework. The 26 contributions are revised versions of papers originally presented at the Second Konstanz Symposium on International Economics and Institutions which was organized by the Long-term Research Programme (Sonderfor­ schungsbereich) "Internationalization of the Economy" on October 1 and 2, 1990. The majority of contributions are reports on research conducted in the Sonderforschungsbereich during the preceding years, and in most cases supple­ mented by comments from invited guests. In addition there are some important papers contributed by colleagues from outside, most of whom have close co­ operative relations with members of the Sonderforschungsbereich.