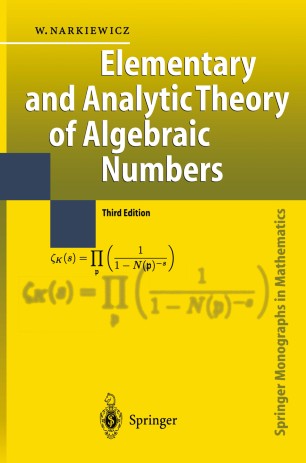 The aim of this book is to present an exposition of the theory of alge­ braic numbers, excluding class-field theory and its consequences. There are many ways to develop this subject; the latest trend is to neglect the classical Dedekind theory of ideals in favour of local methods. However, for numeri­ cal computations, necessary for applications of algebraic numbers to other areas of number theory, the old approach seems more suitable, although its exposition is obviously longer. On the other hand the local approach is more powerful for analytical purposes, as demonstrated in Tate's thesis. Thus the author has tried to reconcile the two approaches, presenting a self-contained exposition of the classical standpoint in the first four chapters, and then turning to local methods. In the first chapter we present the necessary tools from the theory of Dedekind domains and valuation theory, including the structure of finitely generated modules over Dedekind domains. In Chapters 2, 3 and 4 the clas­ sical theory of algebraic numbers is developed. Chapter 5 contains the fun­ damental notions of the theory of p-adic fields, and Chapter 6 brings their applications to the study of algebraic number fields. We include here Shafare­ vich's proof of the Kronecker-Weber theorem, and also the main properties of adeles and ideles.