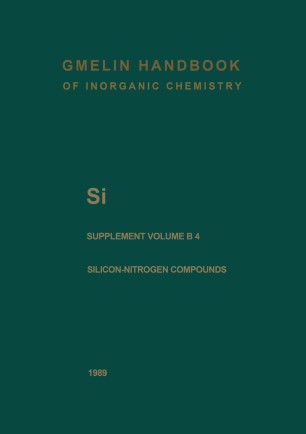 This is the first supplementary volume on silicon-nitrogen compounds. It begins with the system silicon-nitrogen and continues with the binary silicon nitrides, except for Si3N4 that will be the subject of a separate Handbook volume. A chapter describes anionic formula units of the type SixNr and includes a condensed description of a series of ternary silicon nitrides. A treatment follows of the molecular and polymeric silicon-nitrogen-hydrogen compounds in which hydrogen is bonded either to silicon, or to nitrogen, or to both. In other words, those compounds have been selected for this chapter in which one or more nitrogen atoms are bonded to silicon and also those compounds in which additional silicon and/or hydrogen have been bonded to the initial silicon. About 60% of this volume contains a description of predominantly molecular silicon­ nitrogen compounds that are substituted at the nitrogen with groups containing other elements. According to the Gmelin System the substituting groups may be bonded through sulfur, boron, carbon, or both sulfur and carbon, or both boron and carbon. As may be expected, the largest quantity of information exists for compounds that have organyl substi­ tuents on the nitrogen, including the class of silicon coordination compounds that fulfill the criteria. In particular in these chapters, sections and subsections have been formed grouping compounds of the same class together. Compounds containing silicon--carbon bonds any­ where in the molecule are not covered in this volume. General remarks have been given to introduce chapters and to link chapters and sections.