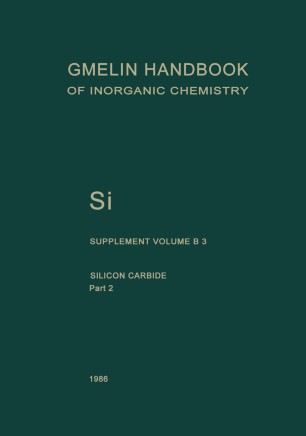 This volume concludes the coverage of silicon carbide, SiC, begun in "Silicon" Supplement Volume B 2, 1984, subtitled "Silicon Carbide - Part I". Part I described the physical properties of SiC, SiC diodes, molecular species in the SiC-C gas phase, and amorphous silicon-carbon alloys. The current Part II ("Silicon" Supplement Volume B 3,1986) covers in its initial chapter the Si-C phase diagram and in the final chapters the higher order systems of Si and C with additional elements through boron, arranged according to the Gmelin system. In between some 95% of the volume focusses on SiC, beginning with its natural occurrence, preparation and formation, and purification, continuing with its chemical analysis, manufacture of special­ ized forms, electrochemistry, and chemical reactions, and concluding with descriptions of its myriad applications. The final applications section covering electronic devices also describes similar applications of the amorphous Si-C alloys. The successive chapters in this volume are often closely interrelated, since it is often necessary to synthesize SiC directly in a form in which it will be applied. SiC cannot be melted and cast, nor rolled nor drawn, nor is it easily electroplated or sintered or purified. Silicon carbide first became known to man when E. G. Acheson in 1891 used an electric current to heat a mixture of clay and carbon to extremely high temperatures.