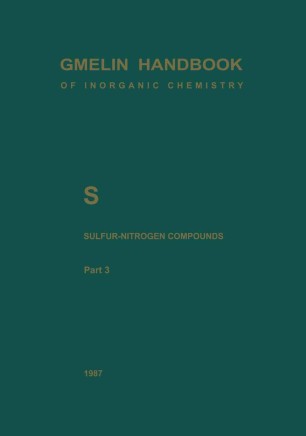 The present volume describes cyclic sulfur-nitrogen compounds whose ring system con­ tains one or two other types of atoms in addition to sulfur and nitrogen. At least one sulfur atom can be regarded as having oxidation number IV in one resonance structure. That means the sulfur in fact has an oxidation number higher than 11 and lower than VI. The volume continues "Sulfur-Nitrogen Compounds" Part 2, in which the binary sulfur(lV)-nitrogen ring systems are described. Compounds with the same "hetero atom" in the sulfur-nitrogen ring are arranged in groups. Within a group the compounds are arranged according to ring size, and for a given number of ring atoms, in order of decreasing S: N ratio. Neutral compounds are described before ions, and saturated compounds before unsaturated, aromatic ones. A very heterogeneous material is brought together in this volume. SN Se2 rings, which 2 strongly resemble the binary S3N2 ring, are covered. S-N-Si rings with five, six, and eight atoms, and also N-S-N-bridged eight-membered rings, are described. The S-N-P rings form a puzzling and complex part of this volume; they readily interconvert by dimerization, cleavage, and by addition and loss of NSN and NPN groups. Especially interesting is the aromatic character of 8-N-P rings.