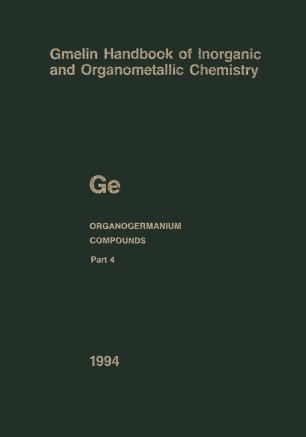 The present volume in the organogermanium series describes mononuclear compounds containing only germanium-carbon and germanium-hydrogen bonds (Chapter 1.3). Germanium hydrides with other additional non-carbon ligands, such as halogen or oxygen­ bonded groups, appear in later chapters according to the Gmelin principle of the last posi­ tion. Compounds with Ge-H and Ge-O bonds have already been described in Volume 5, Section 1.5.1.4, pp. 50/62. The present volume covers the literature to the end of 1992 and includes many references up to 1994. The nomenclature recommended by IUPAC has been generally adhered to. However, compound names were largely avoided, as most of the compounds are presented in tables and are only identified by their formulas. Many of the data in the tables appear in abbreviated form without units; general explanations are given on pp. X/XI. The volume contains an empirical formula index (p. 327) and a ligand formula index (p.341). The editor wishes to express his gratitude to the former author, Professor J. E. Drake, and to Professor J. Satge for his kind advice and fruitful collaboration. Thanks are due also to Dr. A. R. Pebler for editing the English text and to Mr. H.-G. Karrenberg for drawing the numerous formulas and molecular structures.