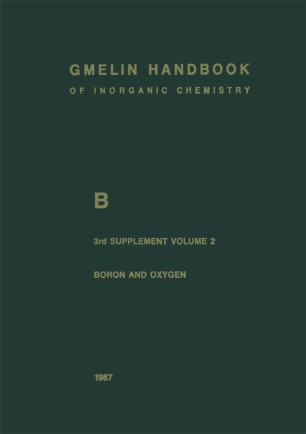 The 3rd supplement continues the updating of the original 20 volumes on boron com­ pounds published between 1974 and 1979. The first supplement to this series brought the literature closing date uniformly to the end of 1977, whereas the two volumes of the 2nd supplement have extended the literature coverage of boron compounds to 1980. Selection and presentation of data parallel the style selected for the two previous supplement volumes, which appeared in 1980/1 and 1982/3, respectively. The Gmelin Principle of the Last Position is largely adhered to, excepting substituted polyboron species containing boron-boron bonds (all of which are found in Chapter 2 within the system boron-hydrogen). Examples of organic derivatives are included, especially in those cases where the carbon-free species are not known; and the carboranes are treated comprehensively. The literature is considered through 1984. Part 1 of the present 3rd supplement contains the systems boron-noble gases and boron­ hydrogen; Part 2 contains the system boron-oxygen. Part 3 will contain the systems boron­ nitrogen, boron-fluorine, and boron-chlorine; the remaining systems and a formula indexwill be included in the final 4th part of this supplement. The first chapter of the present volume on the compounds of boron and oxygen provides sections on the binary boron oxides, including some radicals, and the anhydrous berate ions. The following chapter describes boron-oxygen compounds with hydrogen or organyl groups.