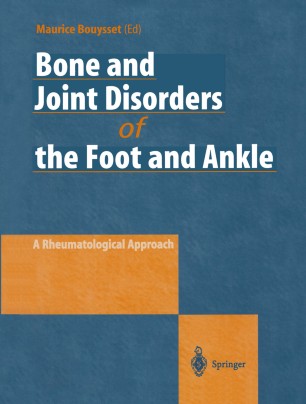 Bone and Joint Disorders of the Foot and Ankle

This encyclopedia on the pathology of the foot is to some extent a response to the wishes expressed in 1978 by the organizers of the "Premieres Journees Europeennes de Podologie" in Paris; in effect, they advocated a close collaboration between the diverse specialities of medicine and orthopedics in the field of the study and treatment of affections of the foot with a view to an ever closer collaboration for the well-being of the patients. An increasing number of patients seek the help of the rheumatologist or orthopedist for disorders of the feet, the clinician is then confronted either with a diagnostic problem when the foot is the organ primarily affected, or a therapeutic problem when a sufferer from a well­ defined rheumatic disease is led to consult him for persistent pain. Even if the pathology of the feet has often been neglected by the medical profession, whereas the hands have received every attention, many European rheumatologists and orthopedic surgeons have for long addressed this problem. The names of some of the pioneers in this subject during the 1950S and 60S will be familiar: EGL Bywaters and A St Dixon in Great Britain, WS Vainio in Finland, K Tillmann in Germany, AS Denis and S Braun in France. Further, one should not ignore the considerable contribution to our knowledge of podology provided by the Monographies de podologie published by Masson under the supervision of Lucien Simon and his team at Montpellier: some ten volumes in all.