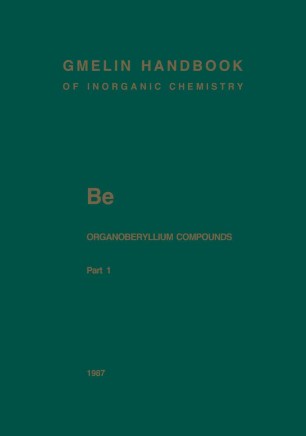 The present volume describes organoberyllium compounds containing at least one berylli­ um-carbon bond, except the beryllium carbides and cyanides. It covers the literature com­ pletely to the end of 1986 and includes most of the references up to mid-1987. This Gmelin volume is different from all other volumes of the series on organometallic compounds in that it is dedicated to an area of research which has virtually come to a complete standstill. Organoberyllium chemistry has never been a very popular field, and only few workers have contributed to its slow growth, as is seen by the relatively small number of publications in the field. This very modest development became stagnant in the early 1970's and was followed by a rapid decline. This exceptional fate of a branch of organometallic chemistry is only partly due to the very limited number of potential application~ of beryllium and its compounds. The compounds of this element are, in principle, at least as interesting and intriguing to scientists as those of other metals in the Periodic Table. No doubt the main reason for the apparent ban of all experimental organoberyllium chemistry is to be found in the established, and alleged, hazardous properties of beryllium compounds. Although similar hazards have been established for other organometallics where active research is still in process, e. g. , mercury and lead, these observations were absolutely lethaI for organoberyllium research.