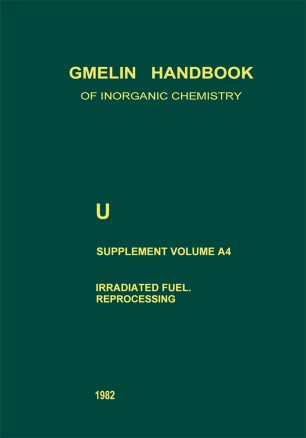 The present volume A4 of the "Uranium" series of the Gmelin Handbook deals with two very important technological aspects of the nuclear fuel cycle: - the behavior of fuel elements during burnup in a nuclear reactor, and - the reprocessing of spent fuel to recover the non-fissioned uranium and newly created materials. The usefullifetime of a fuel element in a nuclear reactor depends strongly on the change of its chemical and physical properties during irradiation. Properties like thermal conductivity, swelling, creep, and oxygen-to-metal ratio are strongly affected by the intense neutron field and the energetic fission products. Furthermore, the high temperature gradient in a fuel element also produces alterations of the initial fuel. such as densification or U: Pu segregation. All of these effects are thoroughly discussed for the different kinds of fuels to be used in modern nuclear reactors today or in the future. The vast amount of very often Contradietory results in sometimes difficultly obtainable Iiterature has been summarized to create a compendium in this field with the two sections, on oxide and on carbide and nitride fuels, respectively. The chapters on reprocessing of spent fuels deal only with fuel elements of the uranium­ 235 thorium fuel cycle and with those containing fuel highly enriched in U. The treatment of U0 2 and (U,Pu)0 has already been given in the transuranic element series.