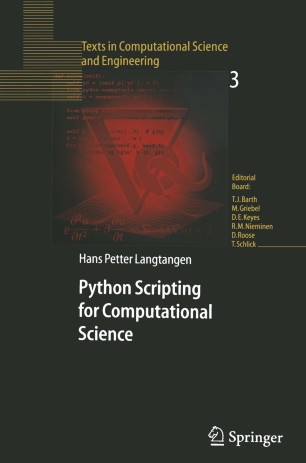 Part of the Texts in Computational Science and Engineering book series (TCSE, volume 3)

The primary purpose of this book is to help scientists and engineers work­ ing intensively with computers to become more productive, have more fun, and increase the reliability of their investigations. Scripting in the Python programming language can be a key tool for reaching these goals [27,29]. The term scripting means different things to different people. By scripting I mean developing programs of an administering nature, mostly to organize your work, using languages where the abstraction level is higher and program­ ming is more convenient than in Fortran, C, C++, or Java. Perl, Python, Ruby, Scheme, and Tel are examples of languages supporting such high-level programming or scripting. To some extent Matlab and similar scientific com­ puting environments also fall into this category, but these environments are mainly used for computing and visualization with built-in tools, while script­ ing aims at gluing a range of different tools for computing, visualization, data analysis, file/directory management, user interfaces, and Internet communi­ cation. So, although Matlab is perhaps the scripting language of choiee in computational science today, my use of the term scripting goes beyond typi­ cal Matlab scripts. Python stands out as the language of choice for scripting in computational science because of its very elean syntax, rieh modulariza­ tion features, good support for numerical computing, and rapidly growing popularity. What Scripting is About.