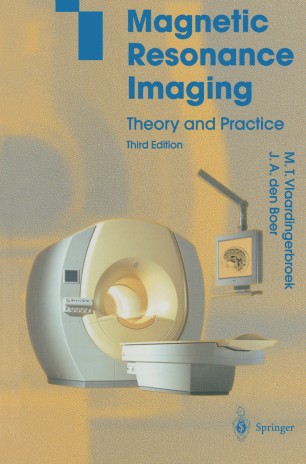 Over recent years Magnetic Resonance Imaging has become a well-established textbook on basic MRI technique. A comprehensive survey of the analytical treatment of MRI physics and engineering, it gives readers the background needed to cope with the problems that arise when applying MRI in medicine or when (sub)systems or sequences for new applications are designed. Special attention is paid to the treatment of intrinsic artifacts of the different sequences, which can be described in a mathematically uniform way for the different scan methods. The book contains many images, especially showing specific properties of the different scan methods. The methods discussed include RARE, GRASE, EPI and Spiral Scan.
The second edition was expanded in response to recent developments. In various places the treatment was refined. In particular, the chapter on motion and flow was expanded, and a new chapter was added, describing the configuration theory and its use in the understanding of multipulse sequences such as BURST, TSE, and FFE. This edition also offered an overview by A.L. Luiten of the early history of MRI imaging.
The additions in the third edition were prompted by the development of stronger gradient and new RF coil systems that have led to a shift of attention in the practical clinical use of some sequences such as Balanced FFE and q-space diffusion imaging and SENSE.