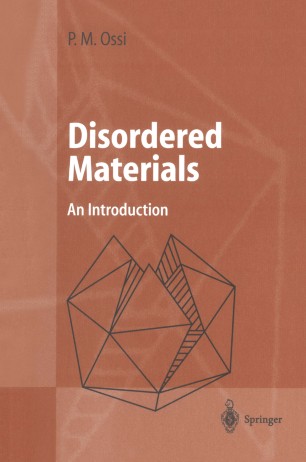 The teaching of solid state physics essentially concerns focusing on crystals and their properties. We study crystals and their properties because of the simple and neat results obtained from the analysis of a spatially periodic system; this is why the analysis can be made considering a small set of atoms that represent the whole system of many particles. In contrast to the formal neat approach to crystals, the study of struc­ turally disordered condensed systems is somewhat complicated and often leads to relatively imprecise results, not to mention the experimental and computational effort involved. As such, almost all university textbooks, in­ cluding the advanced course books, only briefly touch on the physics of amor­ phous systems. In any case, both the fundamental aspect and the ever wider industrial applications have given structurally disordered matter a role that should not be overlooked. The study of amorphous solids and their structure, stability and properties is a vibrant research branch; it is difficult to imagine how any physicist, chemist or engineer who has to deal with materials could possibly ignore this class of systems. The author of Disordered Matter - an Introduction uses this course book at the Politecnico in Milan, Italy. Collecting the material for the course proved no mean task, leading him to have to prepare ad hoc didactic material. The continual exchange between teacher and student has led to the current version of the book.