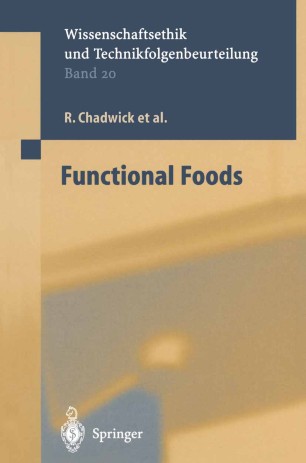 Functional Foods are being introduced into society at a particularly sensitive moment.

Diet-related diseases have assumed proper epidemic proportions significantly affecting the quality of life while obesity is spreading not only to the majority of the adult population but also, more worryingly, to young people who rarely have the option of alternative diets. As scientific proof for the link between diet and disease accumulation, there are increasingly louder calls for policy action.

At the same time, food has been high on the political agenda in recent years. As a result of food scandals such as BSE, dioxin and foot and mouth disease, and also partly due to public discontent arising from the introduction of genetically modified foodstuffs in the market, food has become a main issue in public debates and a focal point of political activity in Europe. Consumer trust in food production and the ability of authorities to protect them has been eroded, as there is widespread suspicion in public transparency and important information is lacking. Consequently, there are also calls for more coherence, transparency and accountability in food issues.

It is within this situation that Functional Foods have been developed. They assume a highly targeted solution to diet related diseases with effective reduction of risk and improved physical and mental well-being, but are still faced with a host of unresolved issues. This report reviews Functional Foods from a multidisciplinary perspective focusing on safety, legal/policy aspects, economy, public perceptions and ethics. It attempts to clarify the main issues and provides comprehensive recommendations for policymaking.