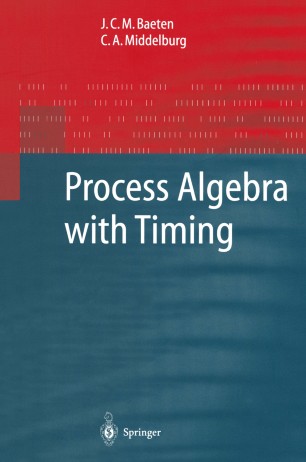 This book is concerned with a number of theories that can be used for describ­ ing and analyzing systems of interacting components in case it is desirable or necessary to regard their time-dependent behavior. Society is becoming increasingly more dependent on complex computer­ based systems that are composed of several components that act concurrently and interact - to synchronize and communicate with each other. The com­ plexity of these systems arises to a great extent from the many ways in which their components can interact. The need that these components act and in­ teract on time as well adds considerably to the complexity. In developing such a system, it is important to be able to acquire a better understanding of the relevant issues at the conceptual level, to describe the system in a precise way at various levels of detail, and to analyze it on the basis of the descriptions. When the early algebraic theories about processes, such as ACP [16, 17, 20], CCS [49, 50] and CSP [27, 39], were developed for that purpose, the established opinion was still that timing is a concern that can more often than not be treated independently. It is therefore not surprising that timing is deliberately ignored in those theories. They have now all been extended to deal with timing.