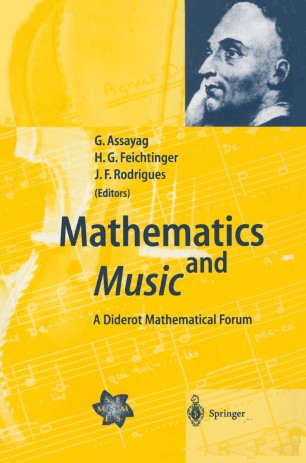 In Western Civilization Mathematics and Music have a long and interesting history in common, with several interactions, traditionally associated with the name of Pythagoras but also with a significant number of other mathematicians, like Leibniz, for instance. Mathematical models can be found for almost all levels of musical activities from composition to sound production by traditional instruments or by digital means. Modern music theory has been incorporating more and more mathematical content during the last decades. This book offers a journey into recent work relating music and mathematics. It contains a large variety of articles, covering the historical aspects, the influence of logic and mathematical thought in composition, perception and understanding of music and the computational aspects of musical sound processing. The authors illustrate the rich and deep interactions that exist between Mathematics and Music.

"Springer has just released a couple of very interesting and off-beat books. Mathematics and Music, edited by Assayag, Feichtinger and Rodrigues, is a collection of articles on math and music. … Even the title is fascinating reading!" (Bulletin of Mathematics Books, November, 2002)

"It is a kaleidoscope of various interactions between mathematics and music. … This is the books strength and attraction. The interaction and impact of mathematics on music is illustrated … . It is a book for the mathematician who already knows about some key aspects of music … and wishes to learn about their historical development … . It is a book for the musician who has an interest in musical theory and wishes to learn … how it is connected to mathematics." (Bob Anderssen and Wayne Stuart, The Australian Mathematical Society Gazette, Vol. 30 (3), 2003)

"The Fourth Diderot Mathematical Forum took place simultaneously in Lisbon, Paris and Vienna … in 1999. Relationships between Mathematics and Music were presented at this conference … . The present book collects the sixteen written contributions to this Forum, illustrating with its large variety of articles the rich and deep interactions that exists between Mathematics and Music … . this rare collection of papers presents a comprehensive list of topics relating fundamental mathematics, applications of mathematics and the relation of both to society." (Zentralblatt für Didaktik der Mathematik, June, 2002)

"Composers and early music buffs will be fascinated by this collection of 16 essays constituting part of the proceedings of the 1999 Diderot Mathematical Forum. … Not a light read but thoroughly recommended." (William Mcvicker, Classical Music, January, 2003)