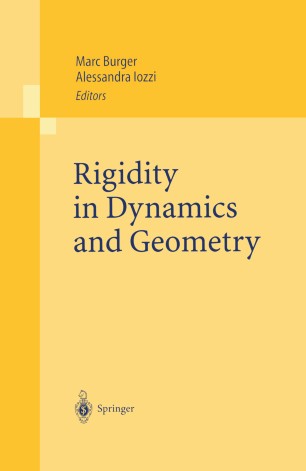 Rigidity in Dynamics and Geometry

This volume of proceedings is an offspring of the special semester Ergodic Theory, Geometric Rigidity and Number Theory which was held at the Isaac Newton Institute for Mathematical Sciences in Cambridge, UK, from Jan­ uary until July, 2000. Beside the activities during the semester, there were workshops held in January, March and July, the first being of introductory nature with five short courses delivered over a week. Although the quality of the workshops was excellent throughout the semester, the idea of these proceedings came about during the March workshop, which is hence more prominently represented, The format of the volume has undergone many changes, but what has remained untouched is the enthusiasm of the contributors since the onset of the project: suffice it to say that even though only two months elapsed between the time we contacted the potential authors and the deadline to submit the papers, the deadline was respected in the vast majority of the cases. The scope of the papers is not completely uniform throughout the volume, although there are some points in common. We asked the authors to write papers keeping in mind the idea that they should be accessible to students. At the same time, we wanted the papers not to be a summary of results that appeared somewhere else.