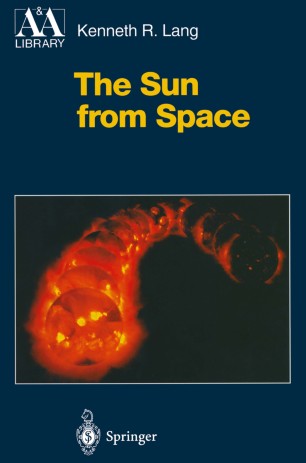 The Sun from Space

Our familiar, but often inscrutable, star exhibits a variety of enigmatic phe­ nomena that have continued to defy explanation. Our book begins with abrief account of these unsolved mysteries. Scientists could not, for example, under­ stand how the Sun's intense magnetism is concentrated into dark sunspots that are as large as the Earth and thousands of times more magnetic. Nor did they know exact1y how the magnetic fields are generated within the Sun, for no one could look inside it. Another long-standing mystery is the million-degree solar atmosphere, or corona, that lies just above the cooler, visible solar disk, or photosphere. Reat should not emanate from a cold object to a hotter one anymore than water should flow up hill. Researchers have hunted for the elusive coronal heating mechanism for more than half a century. The Sun's hot and stormy atmosphere is continuously expanding in all di­ rections, creating a relentless solar wind that seems to blow forever. The exact sources of aB the wind's components, and the mechanisms of its acceleration to supersonic velocities, also remained perplexing problems. The relatively calm solar atmosphere can be violently disrupted by power­ ful explosions, filling the solar system with radio waves, X-rays, and gamma rays, and hurling charged particles out into space at nearly the speed of light.